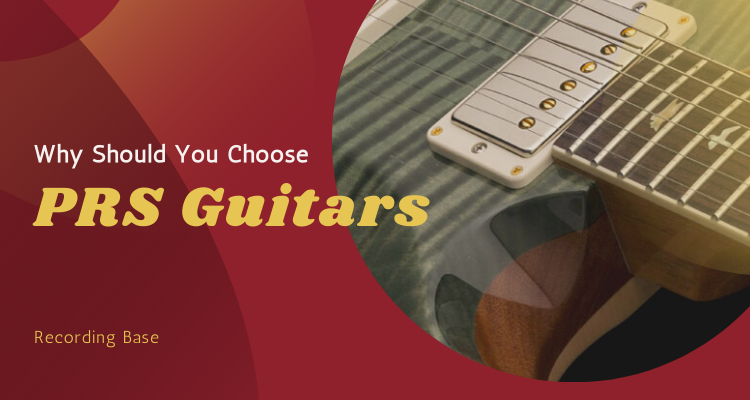 There are plenty of guitar brands out there. You can probably head into a music store and find one for less than $100. However, you might want to pay a little extra to get a premium brand. In this area, PRS guitars are one of the first to come to mind.

But why are these so popular and what makes so many people choose them?

Also, considering they are some of the most expensive options on the market, are they worth it?

In this article, we’ll answer both of these questions. Hopefully, this will help you decide whether or not PRS is the choice for you.

What Makes PRS Guitars So Special?

To understand what makes these guitars so special, we need to take a broader look at the market. There are plenty of guitar makers in the world.

However, PRS has managed to build a strong reputation for providing high-quality guitars. This can be traced back to the start of the company.

It was created by Paul Reed Smith (PRS), who wanted to share his passion for guitars with the world. He recalls making one guitar each month.

He would then perform with it at a gig. This was the ultimate field test, seeing how it would perform under real-world conditions. He would often take notes and make small adjustments, trying to produce the best possible guitar.

He would then wait for many hours after a performance, to try and talk to one of the guitarists. This allowed him to convince them to give his guitars a go.

If they didn’t love it, he would return the deposit. Paul continued like this until he had enough money to make a prototype. Eventually, he used this to get enough orders to start the PRS company.

Throughout this process, one thing was clear. Paul wanted the PRS guitars to be the best on the market. This need for constant improvement continues in the company today.

Because of this, they have been able to make a brand that resonates with guitar lovers all over the world.

Why Do People Choose PRS Guitars?

There are plenty of reasons why players love to use PRS guitars. First, they are made in the United States.

This ensures that will be able to make sure that they can hire someone with a lot of skills in guitar manufacture.

They will also try to make the parts in the United States. Because of this, when you purchase a PRS guitar you know that you are supporting the local manufacturing industry.

However, the main reason why people like these guitars is because they are so high-quality. They use the best possible tonewoods.

They don’t skimp on quality parts. Everything has been painted and finished to the highest possible standards. Because of this, a PRS is like a work of art.

Because of this attention to detail, PRS guitars are a joy to play. It’s a certified Top 10. This means that there are no dead spots on the guitar.

This is only found on guitars that have been manufactured to the highest standard.

This brand is consistently trying to evolve. Because of this, they are always looking for subtle ways to make their guitars sound even better. If you look at their guitars over time, you will be able to see this gentle progression.

Finally, their guitars have been built to last for a long time. As long as you take care of it, you will be able to keep using it for many years to come.

They also sell cases, which ensure that your guitar won’t be damaged when it’s getting moved from one gig to another.

Why Are PRS Guitars So Expensive?

Though PRS guitars might be some of the highest quality in the world, they do come with a hefty price tag. It’s not uncommon to find them selling for around $3,000 to $4,000.

There are a few reasons why they are so costly.

First, they are made in the United States.

Many other manufacturers have shipped their guitar manufacturing plants overseas.

This allows them to take advantage of lower wages. It also lets them get cheaper parts. However, PRS is focused on quality.

Because of this, they would rather hire skilled American workers and get the best possible parts, even if it means paying extra for a guitar.

Also, the construction process takes longer. They will need to add elements like tilted headstocks and fretboard inlays. All this will require close attention from a skilled worker.

They will also need to factor in advertising and taxes. This ensures that the company will be making a profit when they sell one of their instruments.

The most expensive guitars are the PRS Private Stock. These get the most attention, making sure that they are extra special. Also, they are limited edition prints.

Because there is only a small amount that will ever be made, they will be the most valuable. It also makes them great collectors’ items, often they will increase the most in price over time.

Are PRS Guitars Worth the Investment?

Understandably, some people can be turned away by the high prices. Though, as we’ll discuss later, PRS does offer some more inexpensive alternatives. Whether or not the PRS guitars are right for you will depend.

Some people will want to get the highest quality possible, regardless of the price. If this is the case, you might want to consider getting a PRS guitar. Though it will be expensive, they will deliver a superior sound.

For others, though, they will want to find something that is more comfortably within their budget. Because of this, they might want to turn to brands like Gibson. While not as expensive, they can still produce clear notes.

Ultimately the choice is up to you and what you want from your guitar. Though most guitarists agree that if they had the money, they would love to own a PRS guitar.

Are There Any Downsides to PRS Guitars?

As we’ve seen, there are plenty of reasons why PRS guitars are regarded as premium instruments. But there are a few potential downsides that you will need to be aware of.

One of the most obvious is the price.

These are some of the most expensive instruments on the market. Because of this, not everyone will be able to afford them.

Another potential issue is the lack of accessories that comes with the guitars. If you’re paying such a large price, you will want to make sure that you are protecting your investment by purchasing a hard case.

However, you might need to buy these separately, increasing the overall cost.

Finally, these guitars have been carefully designed. Because of this, you might have some difficulty finding replacement parts.

What Types of PRS Guitars Are Available?

There is a wide range of PRS guitar models. Let’s briefly look at some of the most popular options, to help you find the right ones for you.

First, you might want to choose a PRS CE24 or a PRS McCarthy. The CE24 has a bolt-on design, similar to a Gibson.

This gives them a brighter sound. The McCarthy models get their name from their designer, the iconic Ted McCarthy. These tend to have a thicker body, for better sustain.

You might also want to consider the Custom 24 or Custom 22.

These are very similar in design and construction. The biggest difference is that the Custom 22 has 22 frets, compared to the 24 on the Custom 24.

These are also based on the first guitars that Paul created, which helped launch the brand. They have a rich sound and warm tone.

Another option is the PRS SE and the PRS S2 models. These have been designed with budget users in mind. The PRS SE has been manufactured in the Far East.

This reduces costs, so they can sell them for less. Though they still retain the PRS sound. Because of this, they are typically used by beginners and students.

The PRS S2 is manufactured in the United States. However, it won’t have the same finish as the more costly models.

But they will be able to last for a long time. This makes them a good choice for guitarists looking to take their instruments on tour.

Finally, you might want to think about the PRS Limited Edition and PRS Signatures. These are on the upper end of the guitars.

The Signature models have been designed for one popular artist. For example, you can have the rounded shape of Carlos Santana.

Some of the other artists include Zach Myers and John Mayer. The Limited Edition guitars are based on an existing model but will be given unique characteristics.

For example, they give them a special finish. This can make them valuable collectors’ items. They won’t be as expensive as the PRS Signature range.

Finally, while they are best known for their electric guitars, PRS also offers an acoustic range. These tend to have a slightly different shape to other acoustics.

This gives them a better projection, without making them feel too heavy. They might also use a different type of tonewood.

How Does a PRS Guitar Stack Up Against a Gibson?

As we’ve seen, the PRS guitar prides itself on offering superior quality. But is this true?  How do they stack up against a more well-known alternative, like the Gibson?

There are a few key differences in the design. The Gibson is based on a single piece of wood. However, the PRS has two pieces that have been joined together. This means that they will last longer than a Gibson.

Also, the PRS will have straighter strings. This will produce a clearer sound. It also makes sure that they will be easy to tune.

On the other hand, you have the Gibson, these have a bend in the string. This produces a warmer sound. However, it can be harder to tune these properly.  It also increases the chances that the guitar will break.

Finally, you will need to consider what the body of the guitar has been made from. This affects the tone. The Gibson will be made from mostly Mahogany and Maple.

The PRS is made from a wider range of materials. As we discussed, these have all been chosen to give them the best possible tone, while ensuring that the guitar will last for a long time.

Based on this, they are both high-quality guitars. You would be happy with either brand. However, you might get more value for your money by choosing a PRS.

Even an entry-level model will stack up well against a similarly priced Gibson. However, you might want to visit a music store. Play both. This will make it easier for you to see which one you prefer to use.

PRS is a popular brand synonymous with manufacturing high-quality guitars. They don’t cut any corners and use the best possible products.

This ensures that they produce an excellent sound. Because of this, music lovers around the world are willing to pay a premium for their products.

Whether or not the price is worth it is up to you.

It’s best to try it for yourself and see what you think. There are many options available, so you can find one to suit your budget. If you want to know what you should be looking for, check out this informative guide to high-end PRS guitars.