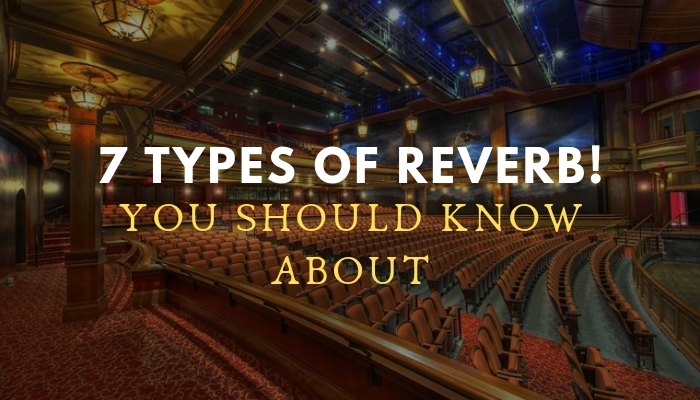 In this article, we are going to read about the seven types of reverb that are used in audio production.

Reverb is the one thing that confuses all of us with its variety. Especially the newcomers in this audio recording field always wonder about the types and setting of the reverb plugins. And it’s not the problem that only newcomers face.

Reverberation is such a vast topic so sometimes I also get stuck with the proper use of it.

According to Wikipedia, here is the exact definition of Reverb.

According to Wikipedia, A Reverb or reverberation, is created when a sound or signal is reflected causing a large number of reflections to build up and then decay as the sound is absorbed by the surfaces of objects in the space” (Wikipedia).

As per the definition, you can understand that it’s not a newly invented effect processed by a plugin but presents in nature from the time of formation of this universe.

As you know that reverb is created when sound is reflected by surfaces. Now, imagine how many types of reverb can exists in this world?

Well, don’t bother about the countless number of reverb as we don’t use all of them in audio recording. Generally, we use only 7 types of reverbs in music production.

But it does not mean that we don’t use other types of reverb. In movie scores where artificial reverb has to created as per the request of the scene, IR reverb plugins are used to create those types of reverb.

I will write a separate article on IR reverbs in my future posts. For today the 7 common types of reverbs, ie;

7 Types of Reverb You Should Know About

So, let’s start to understand them individually.

The most common reverb we all encounter in our everyday life is room reverb. We all use houses to shelter and each house has different types of rooms.

Probably you have a bedroom, drawing room, garage etc in your house. Have you noticed that when you play your guitar in those rooms, there is some pleasant reflected sound you listen with the original sound of the guitar?

However, the specification of reverb is different for the different room but the whole character remains the same in all the rooms.

That’s the natural colour and liveliness to a sound.

Room reverb is more natural as compared to other types of reverbs and hence used in the genres where the naturality should be maintained. In genres like folk, jazz and country which demand natural colour, room reverb is the best choice for you.

In the golden age of audio recording, when there were no plugins to create artificial reverb, natural rooms were used to capture the room reverb or any other types of reverbs.

But today we have countless reverb plugins that are facilitated with different types of reverbs.

So, in one sentence, room reverb is used to add natural colour and liveliness to the sounding object.

Now the next one…

Hall reverb can do magic. As halls or arenas are specially built for fantastic sound in mind, they can take to where the real magic of reverb happens.

Concert halls are designed for entertainment purpose, so they are built to produce minimal room modes, echoes, rings, etc and make the tone of the music as even as possible.

However, some concert halls are designed to boost the low frequencies give an orchestra feel.

Concert halls are built in bow shape so that they can help propagate the sound.

The sole purpose of hall reverb is to process the sound while taking the echoes, rings etc as low as possible.

Due to this feature of hall reverb, it adds some magical reverberation in the sound and also amplifies the sound to make it listenable for the last rows of the audience.

Many artists like Celine Dion, Barbara Streisand etc love hall reverb in their music and widely used in their records.

Hall reverb is best for rock, pop etc genres which are performed in stages.

Now let’s come to the next type of reverb.

Chamber reverb is created by the chambers especially built for that reverberation purpose. In the old days, when digital reverb units and plugins were not available, studio owners were used several tricks to get different types of reverb in the sound.

One and popular used type of reverb at that time was chamber reverb. To create this reverb, studio owners were used a small chamber with much more ringing reflection than other rooms.

This ringing reflection enters the mic with the original sound and creates a special type of reverb called chamber reverb.

Chamber reverbs were used in old R&B, rock bands and several other genres in the 60s. However, today it’s not commonly used in music.

You ‘can’ use it if you want to add some experimental effects in your music track.

Plate reverb is that which is mostly used in today’s music. However, it’s not a natural reverb like others.

According to Soundbridge.io in 1957 EMT, a pioneering German company invented and build the first plate reverb called EMT 140.

In plate reverbs, there are a number of metal plates are used in tow dimensional way down the length and across the width of the sheet of steel.

When the audio signal feeds the driver connected to the plates, they vibrate and create a reverberation effect.

Plate reverbs are invented to simulate the hall reverbs in studios but soon they were popular as one of the best reverb in the audio recording field.

However, the plate reverb units were not so handy and some of them weighed a ton, they became very popular in recording studios.

Today when we have digital reverb units and plugins that emulate the same plate reverb, think of the old days how recordings manage to use those reverb units?

And don’t tell anyone, I also use plate reverbs in most of the songs.

Here is the principle that works behind the plate reverb.

We all know that sound travels faster in metals then air. that’s the reason behind the more echo density of metals.

We also know that higher frequency sound uses their energy much faster than lower ones, hence in plate reverb, the higher energy always lives at the front of the reverb tail while the lower frequencies chase them to tail out later.

These all characteristics allow metal plates to deliver great shiny sound. Plate reverb also brings a brightness to a sound source, so you can use them in really anything in every genre.

The main characteristic of spring reverb is ringing feedback that’s why its named spring reverb. This bouncy and lo-fi reverb is such a great type of reverb that you can use with some melody instruments.

They are widely used on guitars, where they can add bouncing feedback with the and liveliness. You can also use it with electric pianos and organs, to add a vintage depth and dimension to the sound.

But spring reverb is not commonly used in drums and vocals as it’s not as smooth as other types of reverbs.

The ext one is…

The ambience is not a room, hall or plate reverb. It’s a digital algorithm that works its own thing.

The word ambience really refers to an ambiguous space around something.

Got the point? Its the space between the sounding object and the wall from where the phenomena of reflection occur. Ambience resides between them.

You can think of it a very short reverb that doesn’t need any object to reflect back and create room, hall or plate types of reverb. Actually, with any reverb, ambience is added naturally.

It’s a reverb that’s all early-reflections, late-reflections, highly diffuse, highly non-diffuse, whatever without the interaction of any walls like object.

Ambience reverb is widely used in synths where dense harmonics are needed. In digital music, it’s widely used in different types of instruments to create a semi-dry sound.

Apart from the other reverbs, the echoes can swell up before tailing out to the last end. This is not a natural phenomenon and only occurs in the digital domain, however, it creates a very cool effect in the songs.

No linear reverb creates a rhythmic feel when used in rhythm instruments like drums and guitar strumming. The resultant sound feels like keep in-your-face, still having an amount of reverb on them.

So, there was some knowledge about different types of reverbs that we use in audio recording.

I am eager to know which type of reverbs you use in your mixes so don’t forget to comment below with your recommendations. Your comments will help others to mix well and grow faster.

Also, share this article in your social circle to help others with some good information.