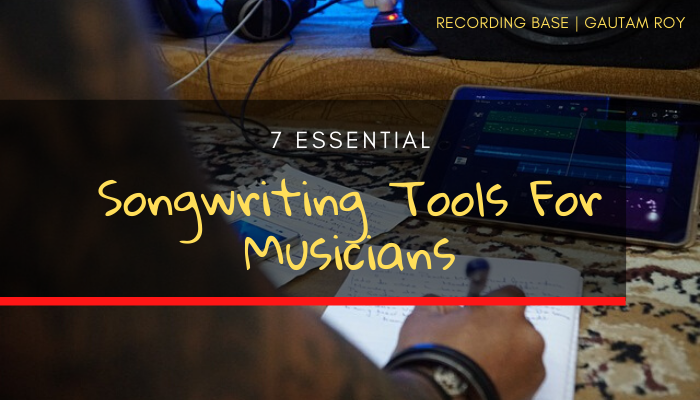 This article is all about the essential songwriting tools for musicians. If you are a musician and don’t own them then you can be trapped by your mind. You won’t be able to remind the tune came into your mind when you are on some other works. Good things can happen anytime, anywhere. Right? Like a song tune, which comes in your mind when you are jogging in a park or having your lunch or maybe in your toilet. But the bad thing is the very forgetful nature of mind.

When the tune comes in your mind, you think, “I will remind it when needed”, but you can’t. Isn’t it?

So, today I’m here with 7 essential songwriting tools that every musician should have in their home.

You’ll also get a bonus ultra-portable songwriting tool which is really helpful even when you are on the go. Pen and Paper really deserve to be our first in our list of songwriting tools. Definitely its the oldest tool not just for songwriting but any kind of writing works.

But the main demerit of this centuries-old tool is you cannot record the tune over it. You can only write the lyrics on pen and paper.

It’s another matter that if you have the knowledge “tune language”, which is quite a common language among trained musicians, then you can write the tune on pen and paper. But, again you need to learn tune language to write your song on it.

The other demerit is,  nowadays, when the production process of a song is very fast, we don’t have enough time to write a song on pen and paper. We need to record it to recall whenever we need them.

Here comes the need for the below songwriting tools… The first-ever tool you need in digital song creation is your laptop or desktop computer. But, when you need the right software.

When it comes to songwriting, the computer helps you in many ways. A few of them are listed below.

Well, I think you are now aware of how important a computer for you as a musician. But wait…

Is your computer fast enough to handle the audio recording process? An official computer definitely can’t handle this so you need a fast computer.

Here is my article on choosing the right computer for audio recording, Read this before proceeding. Now, assuming you have the right computer system for your songwriting process, its time to choose the right audio interface.

When you observe the market, you will be confused about seeing how this market is populated with different types of audio interfaces from 1 channel to several channels and features.

But not all audio interfaces are the same. Some of them are suitable for home studios, some are for professional studios and some of them are for bedroom producers.

For songwriters, audio interfaces with 1 or 2 channels are sufficient. As a songwriter, you are not going to produce the full song and need the recorded song for just reference purposes. However, clear voice recording is a must for songwriters so you can’t just rely on mobile phones.

Well, don’t worry, you will get a 1-2 channel audio interface with just a few 100 bucks. In songwriting, without a microphone, your setup is useless. As you always need to record your vocals, a microphone is an essential tool for songwriting.

But, apart from professional audio recording, you don’t need a $1000 mic to record your vocals. A $100 dollar mic will do the work for you.

However, choosing the right mic around $100-$200 dollar is really a headache.

Well, don’t worry. You can refer to my article Top 6 USB Microphones for Youtubing which also works best in songwriting.

Note: don’t waste your money on costly high-quality microphone as you are not going to record a final track. It’s just a dummy song for reference purposes. When it comes to digital recording, DAW software is the bridge between your audio interface’s IN/OUT and the computer.

DAW stands for “Digital Audio Workstation” which is responsible for each and every audio recording task in this digital audio era. Without DAW, your computer is just a useless songwriting tool.

There are several types of DAWs available in the market and if you are a beginner, it would be tough for you to choose the right one from them.

In the professional audio recording, we need a fully functional DAW which should have MIDI, VST, audio editing, and other features. But for songwriting, we don’t need such kind of DAWs as we just need to record our raw audio for reference purposes.

Personally, I like Logic Pro X which is the world-class DAW for MIDI recording.

However, you can choose other DAWs too. Read 11 Best DAW For Beginners which will help you in choosing the best DAW for songwriting. Now, let us come to another software which is very important for songwriters. When you are writing a song, you also need some rhythms to compose. Without rhythm, you probably go out of tempo and can’t recognize the breaks.

Also, a beat is useful to understand the skeleton of rhythm that will be used in producing a song. So, a beat making software AKA a Drum VST instrument is needed.

VST instruments run with DAW and help in making the music without instruments. You just need some basic knowledge of rhythm and you will do it like a trained drummer.

But, what are the best drum VST plugins for songwriters available in the market?

Read 7 Best Drum VST Plugins to get the knowledge of topmost drum plugins in the world.

Melody is as important as rhythm. Right?

So, how would you go with the right scale and progression? Especially, when practicing without an acoustic instrument? Here comes the use of Chord Progression VST plugins.

The best part of using chord progression VST plugin is you can also record the progression and modify them at the time of production. You can also use these chords as a reference for your song.

Here are 2 best chord progression VST plugins for your DAW

When you go with the above tools you will see that each one is complementary for others. So, you need to invest in all of them.

But there is one tool available in the market which is independent of others and you can use it standalone.

But for a long time, the quality of the portable audio recorder was no so good. There were a number of reasons behind the bad audio quality such as poor inbuilt mic, cassette tapes, etc.

Thanks to this digital evolution, finally we have great audio quality in portable audio recorders too. Even a few companies are manufacturing them taking care of songwriters. You can choose one of those digital pocket audio recorders to record on the go.

You’ve seen that we have 2 main choices in songwriting tools. Portable audio recorder and Computer-based recorder. Both have their own advantages and disadvantages. Now it’s your choice which one is better for you.

Remember, however, portable audio recorders are now capable of recording good quality audio but you can’t control the background noise when the record on the go. On the other hand, computer-based recording needs extra setup which is quite annoying for us.

If you ask me to choose one in both of them, I will go with a portable audio recorder. Because I am a bit lazy to set up my computer for recording each time when I have a song tune in my mind.

Let me know which songwriting tool you’ve chosen. The comment box is waiting for your comments. All the best.

This article does contain affiliate links. If you purchase a something through one of my links I will receive a small commission at no additional cost to you.